From as far back as the Game & Watch in 1980 (or more likely for Americans, the Game Boy which came later that decade), people have been gaming on the go. Portable consoles have been a welcome diversion for commuters stranded on public transportation and other people looking to kill a few minutes (or hours) away from home the world over. The industry had had its share of winners and losers over the years, but represented an attractive market for console manufacturers with 47 million units shipped across platforms in 2008.

2009 saw the release of Angry Birds on mobile phones and other devices that were traditionally not viewed as serious gaming platforms (for the purposes of discussion, “mobile” will refer to phones and similar non-traditional gaming platforms, while “handheld” will refer to the traditional gaming institutions, which includes Nintendo’s products). While the avian-flinging mega-hit was not single-handedly responsible for the rise of mobile gaming, games like Angry Birds and Bejeweled represented a new breed of gamers and a cognitive shift in the way people perceived gaming. Assisted by the concurrent increase in popularity of games supported by social media, shallower, but simpler-to-play games gained a foothold and began to dominate in the mobile space. To what degree did this paradigm shift affect handheld producers such as Nintendo and Sony, and how are they responding to stay relevant in the mobile gaming space? 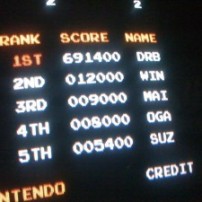 The achievement system (formally introduced with the Xbox 360) has fundamentally changed the way we play games. Whether they’re called “achievements” or “trophies” or something else, the system is a mechanism which, if done properly, can add value to a gaming experience by increasing rewards and exposing gamers to content they might otherwise have missed out on. Further, gamers can (and are meant to) compare their achievements online with their peers and use them to win bragging rights. But for all the good that achievements can do, they’re a mechanism that are very easy to get wrong, and when they’re a requirement for developers (as they are on the Xbox 360), console manufacturers are creating a recipe for disaster.

Trying to use a strobe to balance a hexacopter motor

We’re still working on using this strobe to help balance the motor. We’ve got an accelerometer, too. The results are promising. We’ll be giving more effort next weekend, hopefully.

I am helping my friend Paul try to balance his hexacopter motors for one of his projects. We are trying to use a strobe and an accelerometer to help us observe the imbalances.

We ran into an unusual artifact with my NEX-5N camera.

Video and ethernet at the same time on an AVR

I decided to keep tweaking my NTSC code and my ethernet code until I could get them to co-exist. And sure enough… it works! I can update my ethernet code in the areas of the screen that nothing is going on and still display the NTSC video.

The PCB and schematics are available here: https://github.com/cnlohr/avrcraft/tr… (avrcraft-microsd-glass) NOTE: 2nd layer is not needed.

Details
Page 2 of 3
Tweets by @UniteTechno