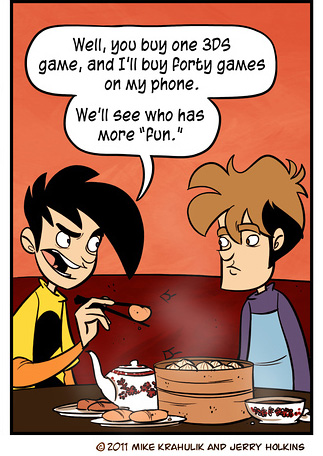 From as far back as the Game & Watch in 1980 (or more likely for Americans, the Game Boy which came later that decade), people have been gaming on the go. Portable consoles have been a welcome diversion for commuters stranded on public transportation and other people looking to kill a few minutes (or hours) away from home the world over. The industry had had its share of winners and losers over the years, but represented an attractive market for console manufacturers with 47 million units shipped across platforms in 2008.

2009 saw the release of Angry Birds on mobile phones and other devices that were traditionally not viewed as serious gaming platforms (for the purposes of discussion, “mobile” will refer to phones and similar non-traditional gaming platforms, while “handheld” will refer to the traditional gaming institutions, which includes Nintendo’s products). While the avian-flinging mega-hit was not single-handedly responsible for the rise of mobile gaming, games like Angry Birds and Bejeweled represented a new breed of gamers and a cognitive shift in the way people perceived gaming. Assisted by the concurrent increase in popularity of games supported by social media, shallower, but simpler-to-play games gained a foothold and began to dominate in the mobile space. To what degree did this paradigm shift affect handheld producers such as Nintendo and Sony, and how are they responding to stay relevant in the mobile gaming space?

A Gamespot survey gauged demand for Sony’s new Vita handheld at 12% of their readers, compared to 36% for Sony’s more powerful (and more expensive) home console. Total handheld unit sales across all platforms for this year are projected at 38 million–a decline of approximately 20% from figures 5 years prior. For an industry that has otherwise experienced annual growth exceeding 10%, the continual ceding of their audience to mobile devices paints a worrying picture.

What is it that makes mobile games so attractive to consumers? We addressed the changes in genre which better matchchanges in modern gaming demographics (the largest demographic group in gaming today is adult women, who represent 30% of all gamers). While consumers are carrying an obscene amount of gadgets on average, they also prefer to carry fewer devices with them for obvious reasons, and having mobile entertainment on equipment they would carry regardless is extremely attractive.

But what really tipped the scales in mobile gaming’s favor was a (relatively) open platform with online distribution. The Android market is essentially a development free-for-all, and even with Apple’s restrictive app development policies, it is far less difficult to develop a game for iOS devices than a handheld console. A development license for iOS devices will cost an entire studio a total of $100 a year and is compatible with the same equipment available to consumers, while 3DS and PS Vita developers can expect to spend over $3,000 per employee who needs access to the special development equipment (and it should be noted that the Vita’s predecessor cost nearly $20,000 per unit). Further, the primary mechanism for delivering games to users for handhelds is still a physical cart sold through a supply chain at retail stores, while mobile games are always delivered digitally (and usually for no transmission fees). This had a cascading effect on demand and pricing:

The result? Mobile games average under $1 each, and are even more commonly offered for free with in-game advertisements, while 3DS and PS Vita games can range from anywhere between $30 to even $50 each. Even with improved graphics, controls, depth, and the power of branding, asking mobile consumers to pay an additional $170 or more for a handheld console and then 30 to 50 times more per game than their mobile substitutes is a tough sell. The gaming giants have attempted to address the issue by adding value in order areas such as handheld integration with home consoles (asfunctional gaming peripherals or for remote access) and the inclusion of their own online stores that offer digital delivery of games from legacy systems.

Still, many consumers feel the value proposition just isn’t attractive enough to merit the purchase, and mobile game revenue officially surpassed handheld game spending in late 2012. Sony reported a 86.4% decrease in game profits at the end of 2012, while Nintendo is faring somewhat better due to a larger install base and recent console release. It remains clear, however, that both companies will need to revise their handheld strategy to better compete with mobile substitutes that are backed by a litany of competitive advantages. Chris Carver from Kukouri Mobile Entertainment drives the point home:

“Any niche handheld gaming device that doesn’t diversify itself to be more than just a gaming device is going to have a hard time parting consumers away from their hard earned money.”