The Evolution of Software Piracy

If you’ve never directly participated in software piracy or the trade of other counterfeit goods, you are no doubt aware that it happens, and that it’s a very real problem for many industries. Even when reading that sentence, you likely felt it was inappropriate to lump harmless file-sharing in with counterfeiting–to many, online piracy is a victimless crime, ranking somewhere on the scale of criminality near sampling a few grapes at the grocery. To make matters worse: the latest trend of cloud storage also has a darker side, as evidenced by the US government shutdown of provider Megaupload; massive online storage repositories have the potential to greatly increase the flow of illegally-distributed property, as well as further cement the intangibility of digital goods in consumers’ minds. All of this begs the question: how did people ever steal things (and feel no shame in doing it) before we had the internet?

Somehow, even after this video’s release, piracy would continue to be a problem.

Bill Gates’s first recorded struggle with counterfeit software occurred in the late 1970s with Microsoft’s (then “Micro-Soft”) first software release, which predated even floppy disks and was printed on paper tape. Enterprising software pirates simply printed their own copies, and soon Gates’s software was a big hit with  many people who had never paid for it. Gates distributed a lengthy letter admonishing the people responsible and has lobbied governments for increased intellectual property (IP) protection ever since.

The Commodore 64 home computer had a particularly innovative method for duplicating software that foreshadowed the next generation of digital piracy: pirate radio stations would broadcast software data in binary format over the airwaves (similar to morse code), and crafty geeks could then record the audio onto cassette tapes, load the tape into the Commodore’s Datasette add-on, and minutes later (very many minutes…it takes a lot of time to “hear” all the 1s and 0s in a computer program) the user would enjoy a brand new piece of software absolutely free of charge. This technology would further evolve with the advent of Bulletin Board Systems (BBSes), which were essentially digital black-markets into which personal computers could dial and retrieve software. But still, many computers were missing the hardware required, and most people lacked the proficiency and connections (BBS phone numbers still had to be distributed through word-of-mouth) to access these underground software rings.

Then, in the 90s, the internet arrived to the masses. Suddenly, it was difficult to find a computer that didn’t have the capability to access our communications infrastructure, and operating system software had been simplified to the point where most people could wield their computers with a reasonable amount of sophistication. Conditions were right for software piracy to run rampant, and many filesharing services rose and fell in the decades to follow–from relatively esoteric applications like Hotline and Limewire (which was sued by the RIAA for more money than actually exists in the world) to the infamous Napster and today’s Bittorrent. Piracy is now easier than ever, but has shifted from the organized resale of physical copies to a completely free exchange of digital information; who could that possibly hurt?

Software piracy at the individual level comes with a myriad of excuses in tow, but the most prevalent attitudes can be paraphrased as “the company isn’t losing money; one copy is invisible to them,” and “I would never have paid for this anyway.” So what about the cases where companies are being victimized on a massive scale by individual vendors–counterfeit products that masquerade as bonafide applications and are sold at bargain prices to unwitting consumers? Taiwan had a piracy rate of nearly 100% in the 1980s, which included not only software, but tangible goods such as clothing and accessories. Today, Taiwan has an estimated 40% piracy rate, while mainland China still reports 82% (down from a high of 93%), though this is largely due to the country joining the World Trade Organization under the threat of sanctions from the United States; not because consumers in the region began to prefer licensed software. 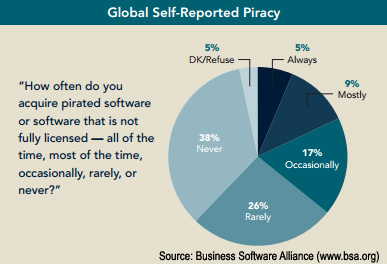 The Business Software Alliance (BSA) recently reported that organized and Individual software theft cost businesses worldwide a total of $63 billion dollars, with the USA topping the chart for most money lost, followed by China, Russia, and India. These figures are brought up every time a major publisher lobbies the government for tighter controls on IP protection, or to crack down on major piracy rings, or to justify burdensome Digital Rights Management (DRM) software at the expense of legitimate customers. But isn’t this really our own fault for giving in to the siren’s song of the internet and illegally downloading billions of dollars’ worth of programs? After all, desperate times call for desperate measures.

Another look at the BSA’s figures hint at another story. While the USA ranks highest in the value of software pirated, it also ranks the lowest for the ratio of software pirated–20% at last count. The total value of legitimate software purchased in the USA is an order of magnitude larger than the next-largest nation, and four times larger than the value lost to piracy within the country. Despite a loss of $63 billion, a worldwide piracy ratio of 42% puts industry revenues at  $87 billion, and this assumes that every single copy of pirated software would have otherwise been legitimately purchased, despite commonly-pirated software such as Adobe’s Photoshop and Creative Suite retailing for over $700 and $1800, respectively. Many people who have pirated such pieces of software have absolutely no ability to pay those kind of prices, and many more turn to piracy because it’s not only cheaper, but comes with fewer strings attached than limitations imposed by DRM. Services such as Steam and iTunes have also thrived on the sale of legitimate digital downloads, and the software industry has still managed to overwhelmingly outpace inflation and even economic downturns with its growth.

So is the internet really to blame for the rash of piracy that has been widespread since the 90s? Are the estimated losses realistic, and are they not also necessary to drive record sales? Finally, are we to blame the consumer for piracy, or the corporations who make it an attractive alternative? Kyle Wagner of Gizmodo comments:

“Make it easy, make it good, and people will pay.”